Into the Unknown: Edgar Allan Poe 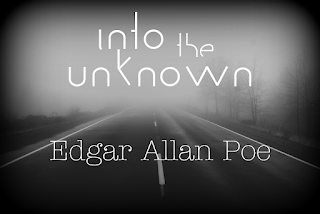 Yup. That Edgar Allan Poe.
Author of arguably the best-known and best-loved American Gothic fiction, Poe is known for his macabre, haunting short stories like The Fall of the House of Usher and poetry, including The Raven as well as one full-length novel, The Narrative of Arthur Gordon Pym of Nantucket. Though he was more popular in Europe during his lifetime, he is now one of the most highly regarded American writers in the States, as well.
Though it is easy to imagine a man such as Poe living a life of mystery, his life was actually relatively normal, despite some misinformation that came out after he died, but we'll get into that later. He probably could never have imagined that 170 years after his death, people like me would still be wondering and investigating exactly what happened to him.
What better time of year than Halloween to take a look at a man whose work is never as celebrated as it is right now?

I do not post graphic pictures and considering the time period Poe's death occurred in, it's unlikely any exist. But still, reader discretion is advised.

THE HISTORY/THE VICTIM: Edgar's early life was fraught with hardship. The second child of actor parents, Edgar Poe was born on January 19, 1809. His father David abandoned the family in 1810, and his mother Eliza died in 1811 when Edgar was barely two years old. Later in life, Edgar claimed his father died just days after his mother, but there are no records to back up the claim.

After the death of their mother, the Poe children were split up. The eldest child Henry was cared for by their father's parents in Baltimore, Maryland. Their younger sister Rosalie was adopted by William and Jane Scott Mackenzie in Richmond, Virginia. John and Frances Allan of Richmond, Virginia took Edgar in and took care of him well into adulthood. During Edgar's college years at the University of Virginia, John sent him with less than a third of the money he needed. Edgar took up gambling to try to cover his school expenses, but eventually had to borrow money on credit and wound up thousands of dollars in debt. John, a staunch opposer of gambling, famously cut Edgar off entirely, leaving his adopted son to fend for himself. Their relationship never recovered. After a brief reconciliation following Frances' death in 1829, the two parted ways permanently. Despite this, Edgar continued to use the Allan surname for the rest of his life.

While we know little of what Rosalie Poe did once she was grown, we do know nearly as much about Henry as we do Edgar. Henry traveled the world by sea and returned to the United States to become a writer. During this time, Edgar's relationship with his childhood sweetheart Sarah Elmira Royster inspired Henry's novel The Pirate.

By October 1849, Edgar was a well-known author in his own right, but his life was on a downward swing. He'd never been able to support himself entirely with his writing, and was more popular in Europe than America. His beloved wife, first cousin Virginia Clemm, passed away of tuberculosis in 1847 at the age of 24. He had married her when she was just thirteen. Their relationship is seen as odd nowadays but at the time wasn't as unusual. Today, there are laws in all states against those who are closely related getting married, and the age of consent no lower than 16 in any state. The marriage was apparently loving, though, and her death left Edgar devastated. He started drinking shortly after Virginia died, and according to friends, his behavior became more and more erratic.

DEATH: Poe was found in a sorry state on the streets of Baltimore on October 3, 1849. He was described as delirious, and in great distress. He was taken to Washington Medical College. Dressed in ill-fitting clothes that didn't belong to him, Poe was unable to speak clearly enough to explain why he was in the condition he was found in, and never came out of this delirium. The only thing he said clearly was the name 'Reynolds,' though no one knows who he was talking about or why. His last words were reportedly, "Lord help my poor soul." He died on October 7th, 1849, at 5:00 a.m.

THE THEORIES: No official investigation was conducted. Most people wrote off Poe's death as either natural or due to less-than-upstanding circumstances.

In the years since his death, all the records have been lost, including his death certificate. The only reports that exist are from newspaper reports that claim he died of 'cerebral inflammation' or 'congestion of the brain.' These two phrases were often used in the 19th and even the early 20th century as a euphemism for causes of death that might have been shameful or embarrassing to the decedent or their family.

And so, we are left with only theories. Look it up online and you'll find lots of people including amateur sleuths like myself chatting about what they think happened.

Going with what little evidence we have, and looking at not just the last few days but the last few months of Poe's life, we can get an idea of what situations he was putting himself in, and the people, animals, and places he was in regular contact with.

One of the most popular theories is also the simplest, and one that I think is fairly likely. It's possible Poe's shabby state when he was found in the streets was all down to alcoholism. There's some evidence he had little tolerance for alcohol, with friends and family stating that both he and his sister would be drunk after one drink. Not buzzed, not tipsy, but staggering, slurring, on-the-verge-of-passing-out drunk. There are conditions that cause this extreme reaction or intolerance and some are genetic, so this makes sense. Also, when his body was exhumed to move it to its current gravesite, it was examined and a hard mass was found in the skull. Earlier in his life, one of Poe's doctors told him he suspected he had a lesion on his brain that might account for his alcohol intolerance. Of course, we have no idea exactly what "lesion" means, where it was located in the brain, or anything else about it.

Rabies, syphilis, carbon monoxide poisoning, drug overdose, and any number of other acquired fatal diseases are also possibilities. While we can't know for sure, Poe, knowing he couldn't tolerate alcohol, may have abstained from it altogether. I can't find any contemporary reports of him being a heavy drinker except after his death, which is something we'll get into a little later. Poe was known to keep cats, who may have transmitted rabies to him through a bite. Bats of course are a common nuisance to many people (they eat their weight in mosquitoes every day, so stop it already with the hate for God's sake), and could have transmitted the deadly disease as well. Rabies can cause many of the symptoms Poe was experiencing at the time of his hospitalization, but so do others like syphilis. So this really amounts to is my long-winded way of saying, "I dunno."

Another theory out there, proposed in 1872, is that Edgar was the victim of the practice of cooping. This is something we're not familiar with nowadays, but in the 19th century it was apparently common. Cooping is described by Poe death theorists as a form of electoral fraud used to get a particular candidate to win an election by coercing people to vote for them, often multiple times. Sources such as Poe biographers explain that cooping gangs would grab someone off the street, liquor them up, then take them to polling stations and make them vote. Sources at the time, however, describe cooping as a practice used to get men to enlist in the Union Army during the American Civil War, which didn't start until twelve years after Poe died, so take this theory with a large grain of salt.

AUTHOR'S NOTE: I mentioned at the beginning of this post that there was a lot of misinformation about Poe put to media after his death. This is true, and I'll tell you how it all went down. Much of what we think of Poe these days is due to an "obituary" written by a rival shortly after his death. I write the word obituary in quotes because it was not a flattering portrait of the man. Rufus Wilmot Griswold wrote the piece under a pseudonym, using his own opinions instead of facts and characterizing Poe as a raving madman. He claimed that Poe had few friends, wandered alone at night ranting to himself, that he hated society almost entirely, and that he was overall an unpleasant person. Despite the known fact that he and Poe were not friends, much of this obituary has been believed as fact almost from the moment it was published. More recently, it is viewed as a character assassination rather than a believable tribute.

I will not gloss over the fact that Poe did marry his much younger first cousin, but I have to mention that marrying cousins was more common in his time than today. We were starting to understand the genetic ramifications of cousins having babies then and there were plenty of people who were opposed to the practice. Prohibition of cousin marriage did not exist in the United States until the 1880s, thirty-plus years after Poe died, and they were not widespread yet. What seems gross to us today wasn't seen as such back then.

THE AFTERMATH: Poe's influence on literature is undeniable and indelible. His works are taught in classrooms. He has inspired countless authors, including yours truly, and will continue to do so for years to come. He is considered the inventor of detective fiction with his Murder in the Rue Morgue, and made early contributions to the then-emerging genre of science fiction.

For 75 years, beginning in approximately 1934, an unidentified person honored Poe at his graveside in Baltimore. Every year on Poe's birthday, January 19th, this person would enter the cemetery and leave three red roses and a bottle of Hennessy cognac at Poe's headstone. He was never identified, and hasn't performed the ritual since 2009, Poe's 200th birthday. Dubbed the "Poe Toaster" by the media, the ritual was probably performed by a man and his son, though their identities are still unknown today.

In December 2009, an original copy of his first book, Tamerlane and Other Poems, sold at auction at Christie's for $662,500, the highest sum ever paid for an American fiction book.

In 2014, a statue of Poe walking alongside an oversize raven, was unveiled in Boston, Massachusetts, entitled, "Poe Returning to Boston."

The Mystery Writers of America honors writers with the Edgar Award every year. Raymond Chandler, John La Carré, Gillian Flynn, and two of my favorite authors C.J. Box and Stephen King have won the award.

THE CONCLUSION: It seems almost fitting that a man credited with the earliest example of the detective story would die in a way that would leave everyone wondering. After such a long time, it's unlikely we'll ever know what really happened to one of America's favorite writers.

Due to the passage of time, no police agency is actively investigating the death of Edgar Allan Poe.