Into the Unknown: Update Special 2019 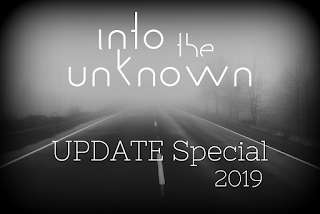 I've been writing Into the Unknown posts every month for a little over two years now, and the time feels like it's flown by. I've covered dozens of cases, and I'm pleased to say that several of them have updates, and one was solved before I published it. I have been updating the individual cases as the information has become available, but I wanted to do a big update post, so you can read through all the updates in one session.

I added post labels so you can look through just the posts with updates by clicking 'Update' or 'Solved' under the Labels header from the menu on the left hand side of the blog.

Asha Degree disappeared on Valentine's Day, 2000. She was spotted by truck drivers walking alone along a highway a mile from her home, and some of her belongings were found a year later, buried in the area she was last seen. In October 2018, police requested information about two more items that may be related to her disappearance. One item was a copy of ​Dr. Seuss' book, McElligot's Pool. The book was checked out from the school Asha attended at the time of her disappearance. The other item is a concert t-shirt from the 80s/90s boy band, New Kids on the Block. This may have been worn as a nightshirt. It was white, with a photo of the band on the front and red piping on the collar, hem, and sleeves. Police did not reveal why they are looking for information on these two items, or how they relate to Asha's disappearance. Anyone with information can contact the Cleveland County Sheriff's Department at 704.484.4822.

Little Miss 1565- Shortly before the 75th Anniversary of the Hartford Circus Fire in July 2019, announcements were made that DNA testing will commence on some of the remains of victims. These are mostly focused on one victim in particular, Grace Fifield, who was never positively identified after she was killed in the disaster. Two women are going to be exhumed, and DNA will be extracted from both. These women are known only as No. 2109 and No. 4512, and are buried in Windsor, Connecticut in Northwood Cemetery. It's possible that no DNA is left to be had, as there are too many factors to name in successful extraction. But, even after all this time, no one has given up, even all these years later, and answers are still coming.

Victoria Prokopovitz vanished from her Pittsfield, Wisconsin home on April 23, 2015. On May 9, 2019, Victoria Prokopovitz's husband, James, was arrested on charges of first degree intentional homicide, resisting or obstructing an officer, and perjury. His girlfriend, Kathryn Friday, who he began dating a month after Vickie's disappearance, was also arrested and charged with obstruction and perjury. Investigators claim that James and Kathryn have lied about their involvement in Vickie's disappearance from the beginning, and that James had access to a sludge pond where he may have disposed of her body. The pond is too hazardous to search, so we may never know if it has anything to do with this investigation or not. ​The prosecutor in this case states that James benefited financially from his wife's disappearance and presumed death. He is being held on a $2 million bond, Kathryn was released after meeting her bond of $25,000, and both are awaiting trial at this time.

Soul Asylum Runaway Train - ​While there have not been any updates to the individual cases profiled in this post, there is a new music video. The song was recorded by new artists in 2019, and a new video filmed, to help more missing children and young adults find their way home. Read through this post, then click this link to view the new video and see missing children specific to your area.

Keith Warren's sister, Sherri, reached out to me and requested that anyone who has information about Keith's death contact her rather than the Montgomery County Maryland Police Department. She also has a message for my readers. Sherri says, "My goal is to get the death certificate changed and the reclassification by MCMPD. If any of your followers have any knowledge or direction to get it accomplished please share. Living with the daily reminder that someone got away with murder with help from (law enforcement) is so unnerving."
Tips: info@TheKeithWarrenJusticeFoundation.org or Swarren@thekeithwarrenjusticefoundation.org
Second Update 2/18/2022: Discovery+ has a new three-part documentary miniseries on Keith's death featuring Sherri and other members of Keith's family. I highly recommend giving it a watch.

Miranda Fenner - I'm including this one even though it was published after the case was already solved. In July 2019, Zachary David O'Neill pled guilty to the murder of Miranda Fenner. He was originally questioned in early 2017 in connection with a nearly lethal attack on a newspaper carrier in 1998. During that interrogation, he confessed to that crime, Miranda Fenner's murder, and a third case as well. He was questioned about Fenner in 2000, but denied involvement at that time. O'Neill lived in Laurel at the time all these crimes, as well as several others he was allegedly involved in, occurred. He said the night Miranda was murdered, he rented several movies from The Movie Store, and Miranda rang him up. One of the movies was pornographic, and when his mother, who he lived with at the time, saw it, she made him take it back. When he returned to the store, he planned to rob it, and waited until all other customers had left. Instead of simply robbing the store, he attempted the robbery he had planned and at some point, attacked Miranda so she couldn't identify him as the robber.​

Oakland County Child Killer - Another suspect who has been of interest recently, Arch Sloan, was revealed in a 2019 Investigation Discovery documentary to have failed a polygraph test. Also, DNA taken from hairs taken from victims' bodies may have matched DNA from hairs found in his 1966 Pontiac Bonneville. He is already serving a life sentence in a Michigan prison for sex crimes involving children.

Thank you for reading the updates on these posts.
Email Post
Labels: Into the Unknown Solved Update