Being an Indie Author: I Messed Up 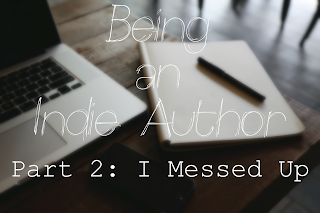 The title of this post says it all. I messed up, but I have fixed it and we can all move on.

Except I want to talk about it, because I feel like the world doesn't really understand what an undertaking being an independent author is sometimes. This is sort of a continuation of my last post, The Rundown. If you haven't read that one, head over there, then come on back and read about my mistake. And how I fixed it.

Warning: this gets a little sweary. Okay, a lot sweary. Gird your loins.

I picked up The Cottage a few weeks ago and decided to read it. I haven't looked at it since I published it, except to share it with reviewers, giveaway winners, etc. It can be fun to read your own stuff once you're no longer obsessed with the world you built. So, I picked up my Kindle and dug in.

​Everything was going well....at first.

And then, I started to see mistakes. Minor ones, ones that a lot of readers might not notice. I jotted them down, thinking I would just fix them, upload them, and not worry about them too much.

And then I saw one and thought, "Sarah, you know better than that," so I wrote that one down, too. A little while later I found one that I swore at myself for. And then remembered clearly going through it with my editor and fixing it.

But, when I opened my final draft on my computer, there was the mistake, staring back at me. I kept going, and the more I read, the more I was sure the draft had somehow gotten messed up. I didn't know how, nor did I care, but what I was reading wasn't the edited final version I was sure I'd submitted.

I was so confused, but I was sure it was a simple fix. So, I started going through the final draft on my computer and the more mistakes I found, the worse I felt about it, because that can't be the version I uploaded, right? Well....

Yup. Wrong. All versions uploaded to publication were fucked up.

So, I decided to share what I went through to fix my fuck-up, to give you a little look-see into my process that you never asked for and probably don't want.

If you've been following me on Instagram, you might have seen my posts about this, but you're only allowed to say so much on social media pages before people start throwing tomatoes, and I don't like tomatoes, so I have a better chance to show you what I mean here. There may be minor spoilers in these pages, but they're in my "I'm in a hurry" chicken scratch and who the hell's gonna read these instead of the book itself, anyway, especially now that I fixed it? Come on. Click HERE and HERE to see my "fix it" notes. I haven't got time to figure out how to embed them on here, so we'll just roll with this, okay?

That's my checklist, and just the small stuff I found at first. I started those rather lazily over the course of a couple days. I was in no hurry. Teeny-tiny mistakes that always slip through the cracks of the editing process. Me being nitpicky. NBD.

I was about eight hours into those when I found the part I mentioned earlier that made me swear at myself. I had to pull a full stop and talk with my editor. I absolutely knew I had fixed it, but there it was, right in front of me, big as life and twice as ugly. When I sent her a screenshot, she was as gobsmacked as I was about it. We chatted for a while about it and, on a hunch, I opened an older draft....and realized....it was closer to the final than the one I uploaded. It still wasn't the right one, but it was closer than the one I was looking at on my Kindle. Then, I opened every other draft I had. I checked my Dropbox, Google Drive, all my email addresses, and thumb drive (every backup method I have), and didn't find the actual finished final. It has disappeared into the ether.

None of the drafts I had were the ACTUAL final draft, the one I meant to upload for sale. I did the fixes I'd written down, made sure both the eBook and paperback versions had those, and then decided to start all over again from page one to get it right.

The reread took about two days. Every time I found a mistake, or something I felt I could have worded better, I wrote it down. By this time, I had realized how bad I'd fucked up and was in full Bob Vila "might as well" mode and decided while I was at it, I would do a full-blown edit. I jotted every mistake down in a notebook, along with the Kindle location I found it in, so I could find it later.

Each of those corrections must be done one by one, by hand, in two separate files, so the eBook and paperback versions match exactly. I don't want one reader getting something different from another. Which leads me to the next task I had to complete, and the reason I noted all the Kindle locations as I was going along.

Kindle locations are those little numbers in the bottom left corner whenever you read a Kindle book, no matter what device you read it on. It's a universal location of the text you're looking at, so that no matter what device you're using and no matter your font size, alignment, or orientation, if you look up location 99, you will always get the same text as a result. THIS is a picture of the list of locations when I was finally done typing them all up.

I know some of them are cut off but the ones that are were the last ones in their line, so you get an idea of how many locations are there. Now, implementing these corrections only took me a couple hours, because I CTRL-F search for what I jotted down and make the correction I suggested to myself, then move on. But finding them and figuring out how to fix them is time-consuming and exhausting, and I had to do these twice each because of the two different formats. Once I realized how big my mistake was, I was up til 2 a.m. two nights in a row, midnight the third night.

But, since I screwed up my book, I wanted people who had already purchased it to get an updated copy, and to get one myself since I also buy my own books when I publish them.

In order to do that, Amazon requires authors to send an email requesting an update push. They approve or deny your plea, and luckily for me, they approved it. Anyone who bought The Cottage got an email that there is a new version for them to enjoy, and they can update it from there. If not, they'll be able to go into their Content & Devices page and update it from there. There's a lot of changes, some of them pretty damn big. Those locations are in a Word file because I knew this would all take a while, so I wrote them in one of those so I could copy and paste the whole mess into the email I would send to Amazon.

I know this post is getting long, and if you're still with me, thank you. I do have a point besides "I'm a dumbass," I swear. I am showing you all this, in all its ugly glory, so you see how much work goes into being an author. I published this book five months ago, and still have to stop what I'm doing now, drop everything, and work like a dog on something I should be able to look back on as a memory. I can't leave my work like it was, and feel bad that paperback copies have gone out that won't be absolutely perfect and can't be updated. I feel bad that people have read the eBook when it wasn't up to its full potential. I'm mad at myself for publishing something that wasn't everything I'm capable of doing.

All in all, I worked about 45 hours over those three days to get this done, and that was after I'd already been working on the book for about eight hours the previous two days. An average work week is 40 hours, so that's almost a week and a half's worth of work done over a long weekend. And, it has to be said, I did all this work without being paid directly for it. All I can hope for now is that I will be paid through royalties after the book sells.

Thanks for reading this, and hopefully you really did go and look at the pics on my Instagram account, because they're worth shuffling through to see the true extent of my own stupidity.
Labels: Advice Being an Indie Author