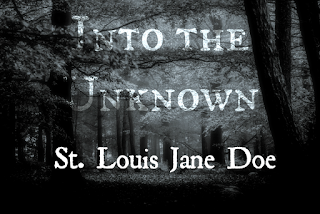 No one deserves to be forgotten. Least of all a child, and especially not for over 35 years. On this month's Into the Unknown, we look at the case of a murdered child who has remained nameless since February of 1983.

Some of the content in this post may disturb or upset sensitive readers. As this deals with the unsolved murder of a child, this post may be particularly disturbing.

I do not post graphic pictures, but websites found by following links in this post likely will, as photos of that nature are abundant in this case. Reader discretion is strongly advised.

As we don't have a history to look into like in most cases, I will jump right into

THE INVESTIGATION: On February 28th, 1983, a pair of men were searching abandoned buildings in St. Louis, Missouri, looking for copper pipes and wiring. They didn't have any luck that morning, but what they did find horrified a city. In an abandoned Victorian house on Clements Avenue, they stumbled upon a headless body in the basement when one of them lit a cigarette and illuminated the room.

At first, police thought the body belonged to a grown woman but when they turned the body over, they realized she was just a little girl. One young enough, she had not yet gone through puberty. The girl was Black, estimated to be between the ages of eight and eleven, and appeared well-nourished and healthy prior to her death. She had two coats of red polish on her fingernails and was wearing a yellow V-neck sweater.

Now for the gruesome part. The Jane Doe was naked save for the bloodstained yellow sweater, and her hands were tied behind her back with a red nylon cord. She had been raped before she was strangled, and then beheaded cleanly, possibly with a large butcher-type knife. She was murdered elsewhere, then dumped in the Victorian home like trash. No blood was found at the dump site. She had been dead less than a week when she was found, and her body was well-preserved, likely due to the cold weather.

Police canvassed the neighborhood, but found nothing belonging to their Jane Doe, nor her head, which is still missing to this day.

This Jane Doe is sometimes referred to as Faith Doe in the media.

THE VICTIM(S) / THE MISSING: St. Louis Jane Doe was a medium-complected Black girl who was between the ages of 8 and 11. She was tall for her age, 5'5" - 5'6" tall at the time of her death and weighed between 70 and 80 pounds. She had a medical condition that may have been asymptomatic, spina bifida occulta, which she and her family may or may not have known she had. This is a malformation in the spine that is not typically visible except through medical imaging. Otherwise, the body bore no scars or other deformities.

THE SUSPECTS: The only suspect even speculated about in the case is serial killer Vernon Brown, who was executed in 2005. The murders he committed were similar to Faith's, but he never confessed to her killing and was never questioned or charged in this case.

THE AFTERMATH: Ten months passed after Faith Doe was found and there were still no leads for investigators to follow. She was buried in Washington Park Cemetery on December 2, 1983.

In 2013, a second investigation was opened to find Faith's remains, as the police had lost track of where she had been buried in 1983. The cemetery she was in was neglected, many headstones were missing altogether, vandalized, or had fallen over. Faith's headstone was not over her actual remains. Photographs from her funeral were analyzed to determine where she was.

Once they found her, they exhumed the body and took bone samples to use isotope readings to try and help determine where she may have been from. The St. Louis Post-Dispatch published an article stating that the test revealed she had likely spent her entire life in the American South, specifically the states of Florida, Georgia, Alabama, Mississippi, Louisiana, Arkansas, Texas, Tennessee, or North or South Carolina. There is another disparity with those results, though, as another source lists the states as Midwestern rather than Southeastern, so I am not sure what's going on there or what the actual results were from those tests. The second source, the National Center for Missing and Exploited Children, lists her possible states of origin as Pennsylvania, Ohio, Michigan, Minnesota, Wisconsin, Indiana, or West Virginia. After the testing was complete, she was reinterred at Calvary Cemetery in their Garden of the Innocents, an area of the cemetery specially reserved for the unidentified dead.

Four missing girls have been ruled out as being the true identity of Faith Doe, and her DNA as well as her hand and footprints are on file to help police find out who she is. I can't find a single source that talks about a witness statement at all, so it's easy to assume that no one came forward with any information, or if someone did it wasn't useful.

What makes this case particularly sad to me is that over 35 years after she was found, no one has come forward to claim this girl. No mother or father, no siblings, aunts, uncles, cousins, no one. This girl, who showed no outward signs of abuse or neglect before her murder, has no one but the investigators and members of the public to mourn her. There is a family out there who knows who this little girl was all those years ago. There are people out there missing her, wondering where she is, who deserve an answer.

Who was this little girl?

If you have any information about the murder of Faith Doe, also known as Hope and St. Louis Jane Doe, please contact the St. Louis Police Department at 314-444-5371. The National Crime Information Center number for her case is U-470002710, please reference this when contacting law enforcement.
Email Post
Labels: Into the Unknown