Into the Unknown: Joyce Malecki 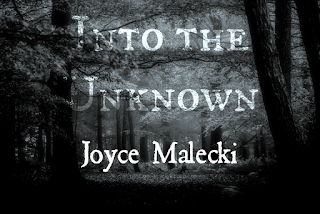 These posts usually come at the end of the month, but I bumped this one up to do an official announcement for The Cottage on the 27th. It's release day in one week! Ahem, anyway, on to more important things.

This month I bring you more from Baltimore. Last month, I wrote about the unsolved murder of Sister Catherine Cesnik. This case may be connected, as both Sister Cathy and Joyce Malecki were murdered under similar circumstances. To top off this complicated case, there may even be more women whose lives were ended by the same unidentified killer.

THE VICTIM: Joyce Malecki was born on June 12, 1949 in Baltimore County, Maryland. Her parents, Casimir and Doris, had three sons, Donald, Darryl, and Pat. At the time she disappeared, she was working for a liquor distributor. She was blonde and pretty, and looked similar to Sister Cathy, who disappeared just days earlier. When she left she was wearing a brown turtleneck sweater and plaid slacks.

THE HISTORY: Joyce Malecki left on a shopping trip to Glen Burnie to the Harundale Mall. She had a date with her boyfriend at Fort Meade, but never arrived. More history is available in my previous post about Sister Cathy Cesnik. In the interest of brevity, I'll omit it here.

THE INVESTIGATION: Two days after she was reported missing, Joyce's body was found partially submerged in the Fort Meade Soldier Park training area. Two hunters constructing a deer blind found the body and reported it to police.

Joyce bore the marks of a struggle, with scratches and bruises on her body. She also had some 15 superficial knife wounds to her neck and and abrasions on her face. An autopsy confirmed that she died either by choking or drowning, and that a deep wound in her neck was not fatal.

The Malecki family lived close to St. Clement Church, which was only two blocks from where suspect in Sister Cathy's murder, Father Joseph Maskell, lived. The family claims they received "religious instruction" from Maskell, and attended retreats with the church. There is no evidence that Maskell was involved in the crime, however.

As her body was found on federal lands, the FBI took over the case. They believed in the beginning there was a connection between the Malecki and Cesnik cases, due to their similarities, but nothing was ever confirmed. Even today, no one is sure if the two cases are related at all. For the sake of this blog post, I'm just going to lay out the facts and let everyone draw their own conclusions. A special agent in charge of the Baltimore FBI office said there were several suspects. Years later, on the docuseries The Keepers, the Arundel county police department claimed that the FBI never disclosed to them any details of their investigation to them, and the case went cold quickly.

THE AFTERMATH: In 2017, the Netflix docuseries The Keepers explored the possible connections between the Cesnik and Malecki murders at length, speaking to Joyce's brothers about her death and their frustration at the lack of leads. With so little information available publicly from the investigating bodies, there's not much for anyone to hold on to in the almost fifty years since Joyce's murder.
The only evidence that connects the two cases are proximity and how closely together both women vanished. The methods by which both women were murdered are very different, with Cathy being strangled, then struck with a heavy, blunt object and Joyce being stabbed and slashed with a knife, then possibly choked or drowned.

And now, time for a tiny bit (okay a big bit) of speculation on my part. In 1970 and 1971, there were two other women who disappeared from shopping centers and were later found murdered in different jurisdictions around Baltimore. Pamela Conyers, who was just 16, disappeared on October 1970 from the same shopping mall in Glen Burnie as Joyce Malecki. She had just attended a pep rally at her high school. Her body was discovered four days later Grace Montanye, also 16, met a stranger outside a shopping mall northwest of Baltimore. She was later found beaten to death 30 miles from her home.

All four of these young women were attractive, looked similar, and disappeared while they were shopping around the same locale. If there is no connection involving Father Maskell, is it possible all these women were victims of an as-yet-unidentified serial killer?

At any rate, whether the murders of Sister Cathy and Joyce Malecki are related or not, or are connected to the murders of Grace Montanye and Pamela Conyers, their families have waited too long for answers, and for peace.

If you have any information about the murder of Joyce Malecki or the other cases mentioned here, please contact the Baltimore City Police Department at 443-902-4822 or email them at HomicideTips@baltimorepolice.org.
Labels: Into the Unknown Two Part Posts