Into the Unknown: Victoria Prokopovitz 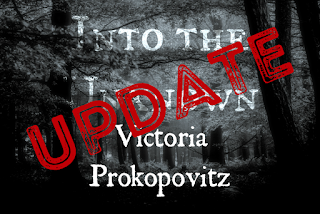 This month on Into the Unknown, I delve into a case that was requested through Facebook. This is my first reader requested post, and another one that hits close to home for me, as it centers on a small Wisconsin community similar to the one I grew up in. I also dig into this case with the help and blessing of the missing person's daughter, Marsha Loritz, with all my gratitude.

Victoria 'Vicki' Prokopovitz disappeared from her home on April 25th, 2013. The five year anniversary is Wednesday of this week, and her family is still looking for her, waiting for answers.
​
And without further ado, let's get to business.

THE MISSING: Victoria Prokopovitz, known as Vicki to family and friends, was 59 years old when she disappeared from her home in Pittsfield, Wisconsin. She was 5'6" tall and weighed 117 pounds. She had brown hair and eyes, and in photographs her hair looks light, almost blonde. She has two tattoos, one of a rose on her shoulder and another of a skunk on her hip. She also had pierced ears and scars on her arms and abdomen. She wears glasses and dentures. She suffered from severe depression and required medication to help regulate the condition. In articles about her, it is mentioned she may be a danger to herself. When she went missing, Vicki was wearing a white jacket, a white and black shirt, gray stretch pants and boots with a low heel. She had a cell phone at the time, but it was left behind, as well as her purse and identification. She was a cigarette smoker, but her cigarettes were also left behind at her home. She lived with her husband, James, at the time in their rented home in Pittsfield.

THE HISTORY: Pittsfield is a small township in Brown County, Wisconsin, populated by less than 3,000 people. In small communities like these, everyone knows everyone. It is comprised of Pittsfield proper, and also a few small unincorporated communities and villages as well. Brown County is home to the city of Green Bay, and signs and flags for their NFL football team the Packers are ubiquitous. Towns like this all through Wisconsin are proudly decorated with the team's colors of green and gold.
The last time Vicki was seen was at her residence in Pittsfield at 10:00 p.m. on April 25th, 2013. Vicki didn't have access to a vehicle and would have had to leave her home on foot.

THE INVESTIGATION: James reported Vicki missing on the evening of April 26th, and claimed he hadn't seen her since 10:00 p.m. the previous night. When he woke at 4:00 a.m. the morning of the 26th, he looked for her but didn't find her, then went to work. The investigation began that day, and focused on finding Vicki. She lived in the home with James and her adult son, Wesley Edges, who still lived at the property in 2017.

Brown County Police initially conducted a search, looking for Vicki in the vicinity of the home, but the house itself was not thoroughly searched until 2015, two years after her disappearance. A search warrant was issued at that time, and the State Crime Lab went in to look for evidence of foul play. Almost 40 items from the property were seized in relation to the investigation, some of them containing materials of a sexually explicit nature, and blood samples taken for potential DNA evidence.

Police and the State Crime Lab didn't comment in 2015 as to why the warrant was issued at that time, or why it wasn't executed sooner because the case it still ongoing. The warrant did, however, mention that Vicki's husband, James, suspected she may have committed suicide, as she'd attempted it years earlier. However, this search and any information it may have revealed, did not lead to a conclusion in this case, and the police have not mentioned that it even turned up any new leads for them to follow.

THE AFTERMATH: There have been no publicly named suspects in this case, and only the two theories we've discussed exist as of the date this post was published. James thinks Vicki may have committed suicide the night she disappeared, as she had a history of depression and she'd attempted years before. The police believe Vicki may have been the victim of foul play, owing to the same evidence. Marsha is quoted by the Green Bay Press-Gazette as saying, "...It's scary in my mind that something terrible could have happened to my mom."

The five year anniversary of Vicki's disappearance is in two days, and there are still no leads. Vicki's children are desperate for answers in her disappearance, and remain active online and in their community, keeping their mother's face and name in the public eye in hopes she will someday come home.

I have to give a HUGE thanks to Marsha for her support and help with this blog post. She also has a personal message for my readers.

“Someone knows something! People do not vanish into thin air! If anyone knows something they can contact Green Bay Area Crime Stoppers and remain anonymous (920)-432-STOP. I just want to find my mom. We have suffered with the questions and the not knowing what happened to my mom for 5 years! Law enforcement has assured us they are not giving up and neither are we!”
5.26.2021: Victoria's husband James was convicted of first degree intentional homicide and sentenced to life in prison without the possibility of parole. Marsha recommended he be offered a lighter sentence if he came clean before sentencing, but he refused to make a statement and was given the harshest sentence possible by Wisconsin law.
I know this is not the end, as Vicki's body still hasn't been found. But it is an answer nonetheless. I hope it brings Marsha and her family some measure of peace going forward.
Email Post
Labels: Into the Unknown Update