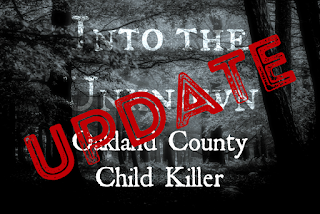 For over a year, beginning in 1976, children in Oakland County Michigan weren't safe. In a thirteen month period starting on the afternoon of February 15, 1976 four children were abducted and killed in a ritualistic fashion. These victims consisted of two boys and two girls, aged from 10 to 12 years. They were all killed by a different method and treated differently during their captivity, but despite these discrepancies in method and treatment, police are convinced these murders (and possibly other crimes as well) were committed by the same perpetrator because of startling similarities between all the victims. Despite the passing of forty years, no one has been arrested and the Oakland County Child Killer, also known as The Babysitter Killer, is still at large.

Some of the content in this post may disturb or upset sensitive readers. As this post deals with child victims, some of the details of the crimes may be particularly upsetting. I do not post graphic pictures, but websites found by following links in this post may. Reader discretion is advised.

THE HISTORY: Oakland County is in the southeast part of lower Michigan. In 1976, the population of the whole county was right around one million people, a population that has only risen by 200,000 today. The county neighbors Wayne County, where the Michigan capital city of Detroit is located. In the 1970s, Oakland County shared in the prosperity that Detroit's automotive industry based economy created. Even today is still among the 25 counties in the Unites States with the highest median income per household, despite the virtual collapse of the auto industry. While child killers have always been a part of history, it seems sometimes that the 1970s produced more than the decade's fair share.

THE VICTIMS: Although the Oakland County Child Killer is suspected in the deaths of several other young people in and around Oakland County, there are four known victims. Mark Stebbins, 12, left the American Legion hall in Ferndale after playing pool with older brother Mike on the afternoon of February 15, 1976. Jill Robinson, also 12, packed a bag and ran away from her home in Royal Oak on December 22, 1976. Kristine Mihelich, 10, was last seen at a 7-11 store in her hometown of Berkeley on January 2, 1977. Timothy King, 11, borrowed money from his older sister and took his skateboard with him as he left his home in Birmingham to buy candy. He was last seen at the candy store not far from his home. Each of these children were found murdered at least four days after their disappearance.

There are two more suspected victims of the same killer, but police are uncertain. James Davison, 13, was abducted from Allen Park in neighboring Wayne County. Three days later he was found strangled, face down in an alley in Oakland County. He survived the attack. Cynthia Cadieux, 16, went missing from Roseville the morning of January 15, 1976 and was found bludgeoned to death the following morning.

THE INVESTIGATION: As in all serial murder cases, the police did not realize that they were dealing with a serial offender at first. Mark Stebbins was found four days after his disappearance on February 19th, 1976. He was laid down on a snowbank, and positioned by his killer. He was fully clothed in the outfit he was last seen wearing, and had been strangled and sexually assaulted with an object. Jill Robinson was found on the morning of December 26, 1976, again laid out in the snow. She dies from a single shot to the face from a shotgun and was wearing the same outfit she disappeared in, her backpack still on her back. Kristine Mihelich was found nineteen days after she disappeared, on January 21, 1977. Her arms were crossed over her chest, and she was fully clothed, again in the clothes she wore when went missing.

Timothy King is probably the most well-known of the victims thanks to his family's emotional appeals to find him immediately after his disappearance. His parents Barry and Marion appeared on television news networks throughout the state, and in the Detroit News, his mother Marion was interviewed in an appeal. She prayed her son would be returned to them safely, and promised to serve him Kentucky Fried Chicken, his favorite meal, when he got home. Six days after he vanished, two teenagers found his body. Timothy had been suffocated and sexually assaulted with an object. His autopsy revealed that Timothy had been fed fried chicken before his death, and was kept alive for a period of time before he was murdered.

Despite the many differences in the disappearances and murders of these children, there are many similarities as well. Each child was found in the snow, carefully positioned, wearing the clothes they went missing in. Timothy King's clothing was even washed and pressed before he was dressed. All of these clues are important, as they tie the crimes together. It wasn't until authorities found Kristine Mihelich's body that they realized children were falling victim to a serial offender. The Michigan State Police formed a task force, pooling officers and officials from thirteen communities within the county.

A witness came forward and told police she saw a boy with a skateboard talking to a man in the parking lot of the drugstore Timothy King was headed to the day he disappeared. She and other witnesses described the man as tall, with shaggy blonde hair and sideburns, 25 to 35 years old, with a dark complexion. The witness at the drugstore said he was standing near a blue AMC Gremlin with a white side stripe. Every Gremlin owner in Oakland County was interviewed, and the lead never turned up any solid evidence. Police no longer believe the Gremlin was involved in any way.

Police theorize the man who committed these murders had a job that gave him the freedom to travel the area without drawing notice, and that he may have been a person a child might trust. They believe it's possible he may have been (or pretended to be) a policeman, clergyman, or a doctor. He may have known the area, and had to have a home where he could keep the children for days without notice.
The task force followed up on over 18,000 leads, which led to the arrests of multiple members of a massive child pornography ring on North Fox Island, but no link was ever found between the ring and the Oakland County Child Killer. To this day, no one has ever been formally charged with the murders. The task force was forced to disband in December of 1978 and the case was turned over to the state police. Despite never being caught, the killer has not struck since he killed Timothy King. Every lead found during the investigation has gone cold.

THE SUSPECTS: There have been several suspects in this case, none of whom have been arrested or charged. Michigan psychiatrist Dr. Bruce Danto, who consulted with the task force, revealed he had received a letter. A man, 'Allen,' claimed he was losing his mind over his knowledge of his supposed roomate's involvement in the murders. He identifies the roommate as 'Frank,' and in a rambling letter, calls him the "OCCK." 'Allen' claimed he accompanied 'Frank' on runs to find young boys, but never witnessed the abductions or murders, and that 'Frank' drove a blue Gremlin, but had junked the car in Ohio. In his letter he said the two men had served in Vietnam and that is where 'Frank' started killing boys. He claimed 'Frank' was angry at the affluent people of Oakland County, taking out his rage on their children. 'Allen' asked Danto to place a notice in the Sunday Free Press that weekend, and after he did responded with a phone call. In the call, 'Allen' claimed he had photographic evidence of his letter's claims, but he never showed up to an arranged meeting, and has never been heard from again.
Archibald Sloan was a local pedophile who had ties to the pedophile ring I mentioned above. Hairs found in his car matched hairs found on the bodies of Mark Stebbins and Timothy King, but no other evidence was found.

Chris Busch was a suspect who committed suicide in 1978. Barry King petitioned the Michigan state police to release information about Busch. A drawing found at his apartment after his death shows a boy, dressed in clothing similar to those Mark Stebbins was wearing the night he disappeared. In the drawing, the boy is screaming (WARNING: SEARCHING FOR THIS WILL GIVE YOU GRAPHIC IMAGE RESULTS). In his apartment, rope was found with stains on it that resembled blood, as well. Chris's father was a high ranking General Motors executive at the time, and his own home was searched for any evidence tying Chris to the crime, but the results of that search were never released to the public. As a teenager, Chris Busch sexually assaulted James Gunnells, another suspect whose hair was partially DNA matched to hairs found on Kristine Mihelich's body. Busch spent time in prison for the crime he committed against Gunnells, who is himself also considered a suspect.

Oakland County Child Killer - Another suspect who has been of interest recently, Arch Sloan, was revealed in a 2019 Investigation Discovery documentary to have failed a polygraph test. Also, DNA taken from hairs taken from victims' bodies may have matched DNA from hairs found in his 1966 Pontiac Bonneville. He is already serving a life sentence in a Michigan prison for sex crimes involving children.

THE AFTERMATH: Mark Stebbins' family filed a wrongful death lawsuit against Ted Lambergine for $25,000. Barry King has been a vocal presence on television in interviews and now the internet with his own blog about the case, advocating for his son's killer to be found. His sister, Catherine, also has her own blog about her brother. The investigation is still considered open and active, but this status has brought a lot of criticism to the Michigan State Police, as keeping the investigation open allows them to keep large portions of the information they've gleaned from the investigation out of the public eye.

The police no longer believe the AMC Gremlin was involved in the crimes. Timothy's brother Chris searched for him after he went missing and the Gremlin was still parked at the drug store where Tim was last seen. Chris did see a suspicious car that night, though, and insists this car warrants further investigation. The car is either a 1970s Pontiac Le Mans or a Pontiac Tempest, dark in color, possibly blue. This car may have been seen in the area where each child was either abducted, or where their body was left after their murder. It may have had damage to the left rear of the car at the time. Bumper marks in the snow at the scene where Kristine Mihelich's body was found were from a Pontiac with a bent trailer hitch.

After forty years, the Oakland County Child Killer still has not taken another victim, but he hasn't been discovered either.

If you have any information regarding this case, please call the Michigan Crime Stoppers at 1-800-773-2587 or the Michigan State Police Metro North Post at 248-584-5740
Labels: Into the Unknown Update