Into the Unknown: Keith Warren 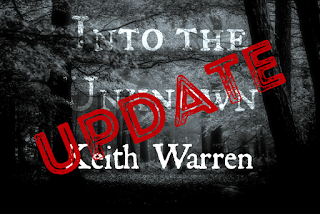 A parent should never have to bury their child, and they should never have to learn that that child has committed suicide. What would be worse than that? Perhaps finding out your child may not have taken their own life at all. That they may have been murdered. That is the nightmare Mary Chambers Couey lived through from the day her son Keith Warren was discovered in the woods behind their home. He was found hanging by the neck, and was presumed to have committed suicide. At first, Mary accepted the police conclusion. That is, until one day she received a packet of photographs at her door that made her change her mind.

Ever since then, questions about police misconduct and misinformation, and the possibility of withholding or outright destroying evidence have come to light.

Some of the content in this post may disturb or upset sensitive readers. I do not post graphic pictures, but unlike most of my posts, several websites found by following links in this post do. Reader discretion is strongly advised.

THE VICTIM: Keith Waddell Warren was a 19-year-old Black man in 1986, and was getting ready to go to college. He was born April 9, 1967 in Topeka, Kansas, then lived in Durham, North Carolina from the age of seven months until he was twelve. He lived in Silver Spring, Maryland with his mother Mary and sister Sherri after their parents' divorce. Keith was five foot ten, with light brown skin and hazel eyes, and had a bright smile in photos of him with family.

THE HISTORY: Keith was known for wearing brown leather work boots, and according to friend Rodney Kendell, mostly hung around white men his own age. He graduated from John F. Kennedy High School, and was planning on moving back to Durham, North Carolina to attend Central North Carolina University. He was popular and well-regarded by his peers and their parents. He drove a blue Corvette his father Cleo gave him, and that only helped draw people to him, according to Sherri. Cleo was a major with the Durham, North Carolina police department. Keith was dating and enjoying himself, but his parents were concerned about some new friends he was hanging around with, saying they weren't his usual crowd and they worried he was getting involved with drugs.

After graduating high school in May 1986, Keith changed jobs and was struggling with money before his move to go to college. The insurance on his car was expensive, and he was anticipating having to make a $2,000 payment toward that. His parents didn't want him to keep the car, but he argued with them about it in the days leading up to his death. According to police, (WARNING: this link will take you to the full autopsy report for Keith, conducted eight years after he died, and there are graphic descriptions of the autopsy process and the condition of his body at the time) Keith was hospitalized a year before his death following an argument with his girlfriend at the time. After the fight, relatives were concerned for his safety. He was also briefly hospitalized around the time of Cleo and Mary's divorce, but the word 'depressed' was not used at that time. There are conflicting opinions between Keith's family's accounts of his hospitalizations and police reports. The police lean harder toward Keith being depressed and/or suicidal at those times, but his family claim he was just upset and dealt with his emotions properly following these incidents.

On July 29th, 1986, Keith disappeared from his home. On that same day, a friend named Mark Finley was looking for Keith, acting as if he was desperate to find him. Sherri said on Unsolved Mysteries in 1996 that Mark was not someone she ever saw in their family home, and that the last time she was aware of Mark and Keith being in the same place, around the time the two were in the eighth grade, they fought. Mark approached Rodney Kendell, one of Keith's closest friends, as did several other young men. Rodney was surprised by this, as all the young men who were looking for Keith were Black, and Keith's friends were mostly white at the time.

Two days after he disappeared, he was found in the woods behind his home in Silver Springs.

THE INVESTIGATION: I'm not going to mince words here. There's not a whole lot of investigation to write about, because once Keith was found and police were called, they immediately ruled his death a suicide. They didn't order an autopsy and Keith's body was sent to a funeral home chosen by the police instead of the family. Despite this, the family initially accepted their conclusion, difficult though it was.

Mary Couey was notified of her son's death about 6 hours after he was found, and once police drew their conclusions, they gave her his personal effects, which consisted of his trademark brown boots, a blue backpack, a navy blue hooded sweatshirt, and a visor with rock star Jimi Hendrix on it. They also received the rope, and two empty four-pack carriers for wine coolers in bottles, and two caps from the bottles.

Six years passed with no further investigation, until April 9, 1992, which would have been Keith's 25th birthday. When Mary returned home from work that day, she found a manila enveloped wedged between her storm door and front door. When she opened the envelope, she was horrified to find graphic photographs of her son's body as it was found in the woods. At first, she thought this was just a tasteless and hurtful prank, but as she looked closer at the photos, she realized there were a lot of discrepancies in the information she had about her son's death and what she was seeing.
The clothing Keith was wearing in the photographs didn't fit him, and weren't items she recognized. Keith wore brown work boots, which she'd received from police in his personal effects, but in the photographs he was wearing white tennis shoes. In the pictures he was fully clothed in jeans, a button-down shirt, and those sneakers. None of those things were given back to her after his death, and none of the things Mary received from police are in the photos, either. There were also leaves on the back of the shirt Keith was wearing, suggesting he was lying down before he was hanged. Police have admitted they are copies of official photographs of Keith and the scene of his death. But no one seems to know where the item's he's wearing in the pictures have gone, or who sent the photos to Mary in the first place.
What was even more disturbing was just how Keith was hanging from the tree in the photos. Keith was hanging by his neck from a rope tied around a small sapling. The rope then went from this sapling, up through a fork in a second tree, then was anchored to a larger tree. This somewhat convoluted system would allow a person to stand, place the rope around their neck, then simply lower their body, which would asphyxiate them until they fell asleep, then as their weight continued to compress their throat, they would eventually die. The setup was more intricate than most hanging suicides tend to be, but every suicide is different. This setup is more commonly used in situations where one person needs to hoist something (or, more ominously) someone, off the ground and can't lift them without assistance.

After she received the photos, Mary had Keith's body exhumed. At autopsy, chemicals were found in his system that are consistent with glue and/or solvents. While recreational abuse of these types of substances is frighteningly common, the concentrations of them in his body suggested they were inhaled or ingested in large quantities prior to death, and that their use may have been the actual cause of death, not the hanging. The chief medical examiner for the state of Maryland insisted those chemicals were in Keith's body because of the embalming process, but the ME performing the autopsy disagreed, stating that the embalmer did not use those specific chemicals, and the distribution of one that was in the embalmer's report was consistent with inhalation, not embalming. There were two chemicals in his body that are not used in embalming at all, and those alone may have been fatal. One of those chemicals was potent enough that a chemist claimed he would have died before he hit the ground if he'd used it.

Also worth noting: after receiving the photographs of her deceased son, Mary discovered the tree that supported Keith's weight in the hanging was cut down. One officer said it was kept in evidence, but why would they cut it down as evidence if they believed Keith's death was a suicide and had already closed the case?

One further note on the photographs Mary Couey received: attached to one of them was a note that said, "Don't worry. Mark Finley is next." Mark was one of the young men who was searching for Keith after he disappeared. He called Mary in June of 1992 and left a message for her. He said he would come by to visit her and she said his words were, "I need to unload." One month later, Mark Finley was killed when he struck a curb while riding his bike. He was thrown off the bike, struck his head, and died of his injuries.

Keith's car was parked 1/5 of a mile from where his body was found, so he would have had to walk while carrying two four-packs of wine coolers and a large reel of rope, if he did in fact kill himself. On that walk, he would have passed dozens of houses and parking spaces nearer to the place where he died. Also, if he drank all eight bottles of wine coolers, where were the empty bottles? Why were they not recovered at the scene? Where are the clothes and shoes he was wearing in the photographs, and whose were they?

THE AFTERMATH: Sadly, in 2009, Mary Couey died without learning what happened to her son. Five years later, police admitted the investigating officer used hearsay evidence to classify Keith's death as a suicide. That officer used that information to justify choosing the funeral home and ordering that no autopsy was necessary. Sherri Warren requested that the case be reclassified and reopened in June of 2014. It seems, despite all this effort, that nothing has come of any of the new information.

Despite the lack of new leads, Sherri is still seeking information about her brother's death. He had a family who loved him and a community devastated by his death. These people deserve answers, and have waited far too long to receive them.

UPDATE 7.31.19: Keith Warren's sister, Sherri, reached out to me today and requested that anyone who has information about Keith's death contact her rather than the Montgomery County Maryland Police Department. She also has a message for my readers. Sherri says, "My goal is to get the death certificate changed and the reclassification by MCMPD. If any of your followers have any knowledge or direction to get it accomplished please share. Living with the daily reminder that someone got away with murder with help from (law enforcement) is so unnerving."
UPDATE 2.18.2022: There is a brand-new three part documentary series on Discovery+ called Uprooted that covers the death of Keith Warren and the so-called investigation that followed. Sherri and her family feature prominently in the three part series, still advocating for a proper look into what happened the day her brother died. Those who were on-scene the day his body was discovered speak about their impressions of Keith's death, and their frustration at the ensuing events. I highly recommend giving it a watch.
Please send tips to either:
info@TheKeithWarrenJusticeFoundation.org
or
Swarren@thekeithwarrenjusticefoundation.org
Email Post
Labels: Into the Unknown Update