Into the Unknown: Asha Degree 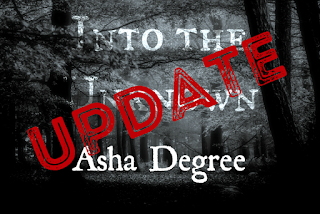 ​Asha Degree vanished after leaving her home in the middle of the night on Valentine's Day in 2000. The circumstances of her disappearance are alarming to say the least, as it seems she left her home of her own volition that night.

THE VANISHED: Asha (pronounced AY-sha) Jaquilla Degree was a nine year old Black girl who lived with her parents Harold and Iquilla and older brother O'Bryant in Shelby, North Carolina. She was four-foot-six and weighed sixty pounds in 2000 with black hair often worn in pigtails and brown eyes. Iquilla described her daughter as a shy girl who stuck to the rules her parents set for her. She was afraid of dogs, and her family saw no reason she would ever leave the house. Asha attended fourth grade at Fallston Elementary School.

THE HISTORY: Both Harold and Iquilla Degree worked at the time and the Asha and O'Bryant typically let themselves in to the family apartment after school. This arrangement worked well for the family, who seemed to everyone around them to be a normal, happy family. The parents kept their children carefully protected, and didn't even own a computer in order to protect them from predators on the internet.

The weekend of February 14th, 2000 was President's Day weekend, and schools were closed Friday the 11th. Asha and O'Bryant spent that day at their aunt's house. Both siblings had basketball practice later in the day. On Saturday the 12th, both siblings had a game. Asha's team lost, and she fouled out during the game. She was upset immediately after but seemed to rally and watched her brother's game later. On Sunday the 13th, the family attended church as usual and Harold Degree went to his second shift job that afternoon. Both siblings shared a single bedroom, and went to bed around 8 p.m. The power to the apartment was cut after an accident, then restored shortly after Harold returned from work at 12:30 a.m. He checked on the children then, and they were in bed as expected. Before he went to bed himself at 2:30 a.m., he checked on them again and all seemed well with his children.
Iquilla went to the childrens' bedroom to wake them for school before 6:30 that morning, Monday the 14th, and found only O'Bryant in his bed. The family called 911 and police initiated a search of the immediate area.

THE INVESTIGATION: O'Bryant recalled hearing Asha's bed squeak late in the night, but figured she was just repositioning herself and went back to sleep. This was the last time the family could be sure Asha was in the home. At some point after O'Bryant heard that squeak, Asha grabbed her backpack, which she'd packed earlier with several changes of clothes and some personal items, and left the apartment.

After seeing a TV report about Asha's disappearance two truck drivers called police to report they had seen Asha early that morning, walking along Highway 18 about a mile from the Degree apartment. The time was between 3:45 and 4:15, and both drivers described the outfit she was wearing as a long-sleeved white t-shirt and white pants. She was headed south on a part of the road just north of the highway's junction with Highway 180. When another driver turned around to get nearer to her, thinking it odd a child that age was out at that hour, she left the highway and fled into the woods.

Asha's fourth grade class had just finished The Whipping Boy by Sid Fleischman. The book tells the story of a commoner who is whipped in place of an errant prince. The children in the story run away and the book follows them on their adventures. At the end of the story, the kids return. It's not known if this book inspired Asha, but I thought it was worth mentioning.

The items that Asha took with her were as follows: a black backpack, a Tweety Bird purse, a pair of blue jeans with a red stripe, black sneakers, a long-sleeved white shirt with purple lettering, a red vest with black trim, black overalls with Tweety Bird on them, and a long-sleeved black and white shirt. Along with the clothing, she also packed a pencil, Mickey Mouse hair bow, a marker, and her house key.

Three days after her disappearance, the pencil, bow, and marker were found on the ground near a tool shed. The store to which the tool shed belonged was about a mile from the Degree home. Candy wrappers were also found not far from where she ran into the woods. It's now known whether those belonged to Asha, but it's a possible clue worth mentioning here.

THE AFTERMATH: A year and a half after that fateful Valentine's Day, which was also Iquilla and Harold's wedding anniversary, Asha's backpack was found buried near the same highway she was last seen on, but almost 30 miles further north. This is odd as she was seen walking south. The bag was wrapped in two plastic trash bags before it was buried, obviously suggestive that whoever put it there didn't want it to be found. Animal bones and men's khaki pants were found nearby. Authorities involved with the investigation have never released information about any evidence that was found on or in the bag, and the exact contents of the bag are only rumored and not confirmed, so I'm not putting any of that on here.

After Asha's backpack was found, police concluded that she had likely met with foul play. They searched the area around its location, but there was nothing else at that scene. In September 2017, the FBI joined the investigation, saying there were new clues and that they were "beefing up" their efforts to help find Asha. Her case has remained open for over 17 years, following leads and taking tips. The FBI believes she may have gotten into a 1970s Lincoln Mark IV or Ford Thunderbird, dark green in color with rust around the wheel wells. There are new age progressions showing what she may look like now.

No one has given up.

Asha's parents still live in the same apartment they were in the night she vanished, and still have the same phone number in hopes she will one day come home. She would now be 27 years old.

UPDATE: In October 2018, police requested information about two more items that may be related to her disappearance. One item was a copy of ​Dr. Seuss' book, McElligot's Pool. The book was checked out from the school Asha attended at the time of her disappearance. The other item is a concert t-shirt from the 80s boy band, New Kids on the Block. This may have been worn as a nightshirt. It was white, with a photo of the band on the front and red piping on the collar, hem, and sleeves. Police did not reveal why they are looking for information on these two items, or how they relate to Asha's disappearance. There is still a $45,000 reward for information leading to Asha's whereabouts.

If you have any information about the disappearance of Asha Degree, please contact the Cleveland County Sheriff's Office at 704-484-4822.
Email Post
Labels: Into the Unknown Update