Into the Unknown: The Frog Boys 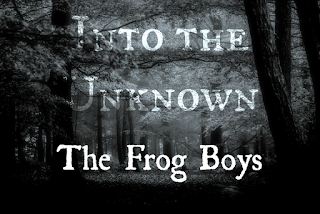 ​This week, I have a case from South Korea that has baffled investigators and amateur sleuths alike. This is a heartbreaking case that took over a decade to figure out, and there are still many questions remaining.

​Some content in the following post may disturb or upset sensitive readers. I do not post graphic photos, but websites found by following links may. Reader discretion is advised.

THE HISTORY: "The Frog Boys" is the name given by local media to a group of five young Korean boys who initially disappeared from the city of Daegu on March 26, 1991. The boys had gone on a hike to find frogs while celebrating a national election holiday that gave them a day off school. They walked together to Mount Waryong, a mountain park an hour's walk from the city center. The boys never returned to their homes.

THE VICTIMS: The boys were friends U Cheol-won (13), Jo Ho-Yeon (12), Kim Yeong-gyu (11), Park Chan-in (10), and Kim Jong-sik (9). There is not a lot of information about the boys that I can easily find, but the photographs of them show happy, healthy-looking boys. They knew the area around the park well, and only lived a few miles away.

THE INVESTIGATION: When the five boys didn't return home, their parents reported them missing. An initial search by their families and local residents turned up nothing. Before long, a massive search ensued on the mountain, aided by the support of then-President Roh Tae-woo, who ordered 300,000 policemen to help search for the missing children. Millions of fliers were distributed, and a reward equal to $35,000 was offered in exchange for information on the boys' whereabouts. Despite all the effort put into the search and investigation, the case went cold and stayed that way for over ten years.

On September 26, 2002, a man searching for acorns found pieces of children's clothing and shoes scattered on the mountain. After he notified police, the bodies of all five Frog Boys were found in a shallow grave. At first, investigators thought the boys had huddled together for warmth after getting lost, and died of hypothermia. Their parents pushed for more information, however, sure their sons had not died of natural causes. They were, after all, only a few miles from their homes. If the weather had been bad enough that they huddled together for warmth, why were their clothes found outside the put they were found in? The mountain was searched over 500 times in the 21 years after their disappearance. Why hadn't they been found? Just a week later, during the examinations of the skulls, evidence of sharp- and blunt-force trauma and shotgun pellet wounds lead investigators to change their conclusion of what happened to the Frog Boys. It was clear they had all been murdered.

THE AFTERMATH: This case has nearly no theories as to what happened to the boys. One suggestion was that the boys were killed by someone who "flew into a rage." They also suggested bullies may be responsible. In 1991, there was a fifteen year statute of limitations for murder, so even if a conclusion can be reached, the killer will never be prosecuted. Authorities have stated that regardless of the expired statute, they will continue to investigate leads to hopefully provide the families with closure. The boys funerals were held in March of 2004, one day shy of exactly 13 years after they disappeared, and their skulls were donated to medical research.

It's been 26 years since the Frog Boys disappeared, and 15 since their bodies were found, and police are no closer to finding answers. If you know anything about this case, please contact the Daegu Metropolitan Police through their website. I feel like it must be said, I can't navigate their website or find other contact information to save my soul, but maybe if you have information for them you'll have better luck.
Email Post
Labels: Into the Unknown