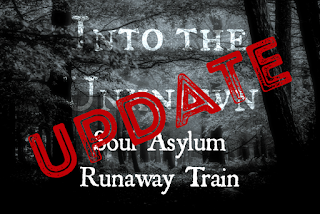 ​In 1992, the band Soul Asylum made a music video for their hit song, the Grammy-Award winning Runaway Train. The song was ubiquitous at the time and for years after, I remember hearing it almost daily. It was a pretty standard video of a rock band playing in what looked like an abandoned house except for one detail. What made the video stand out among the hundreds of others in the post-grunge era was that the video shared details about missing teenagers.
In this very special post, I will profile multiple missing persons from that video and give updates on those who have been found.

THE MISSING: I've updated this post with links to the Charley Project pages for each of the missing persons, if available. The links I used to source these profiles have vanished in the latest website move. I apologize.
Another note: In different geographical areas of the U.S. and Canada, different missing persons featured in the original music video. This is not a fact I have overlooked, I simply cherry-picked a few of the cases from version of the video featured on the band's YouTube page when I wrote this post. I have not forgotten that there were others featured, and may return to the videos in the future to post about more missing people.

17-year-old Christopher Kerze disappeared from his home in Eagan, Minnesota on April 20, 1990. He'd complained of a headache that evening, and his parents left him home to rest. When they returned that evening, he was gone. All they found was a note that read "Mom, something important came up + I'm feeling somewhat better. Back by six. (Unless I get lost.) Love, Chris" The word 'lost' was underlined twice. He withdrew $200 from his bank account on the day he vanished, took his father's Mossberg bolt-action 20-gauge shotgun and clip, and used the family's van to leave the house. The next day, a note postmarked from Duluth, MN, arrived at the family home. In it, the writer, who claimed to be Chris, wore that he had faked his headache so he could go "not even I know where." In the note, he said he planned on committing suicide. The van, a light blue 1988 Dodge Caravan, was found twenty miles outside Grand Rapids, MN, in an area near the George Washington State Forest and Chippewa National Forest. Chris never came home and has never been seen or heard from again. It's believed Chris may have been suicidal at the time of his disappearance, despite being an excellent student, having many friends, and giving no indication of problems in his life prior to his disappearance. His parents still live in the same home and have their same phone number in case Chris is still alive and needs to come home. If you have any information regarding Chris Kerze's disappearance, please call the Eagan Police Department at 612-454-3900.

13-year-old Elizabeth Wiles ran away from her home in Lamar, Arkansas to be with her 18-year-old boyfriend her parents didn't approve of. The couple wound up in San Diego, California, where they spent the next two and a half years. When Elizabeth, known as Liz, saw herself in the Soul Asylum video, she became upset and called her mother, who arranged for her return home five weeks later.

Martha Wes Dunn was just 15 years old when she vanished from Daingerfield, Texas on September 5, 1990. She and her parents argued that day, and they last saw her at 2:20 p.m. At 10:00 p.m. that evening, she spoke to her boyfriend, Eric Owens, who was 17 at the time. The next day, they both disappeared. They pair have allegedly been sighted in Durant, Oklahoma by a family friend and may have also traveled to Kansas. The pair are believed to have run away, and there is no evidence of foul play, even though both were involved with drugs at the time of their disappearance. Information on Eric is not available, but he is also still missing. Martha may be in need of medical attention for an unknown condition. Martha's sister has posted a YouTube video pleading for information in regards to her sister's disappearance. If you have any information about the disappearance of Martha Wes Dunn or Eric Owens, please call the Morris County Police Department at 903-645-2232.

On July 23, 1992, Wilda Mae Benoit was released from a hospital in Creole, Louisiana and her family left her at home for a while after her release. She was gone when they returned home and was never heard from again. She had suffered a shoulder injury and was wearing a hospital gown when she disappeared. Initially, police believed she had run away, but as the years have drawn on, that conclusion seems less likely. Just 14 years old, Wilda needed painkillers for the shoulder injury she had at the time of her disappearance. There are few details available in this case. If you have any information about the disappearance of Wilda Mae Benoit, please call the Cameron Parish Sheriff's Office at 337-775-5111.

Byron Eric Page, aged 17, disappeared from a Los Angeles bus stop at the corner of Overhill and Slauson streets on January 29, 1992. Eric, as he was known to friends and family, planned to take the bus to a music warehouse in West Hollywood. It's not known if he ever arrived, as employees do not recall seeing him that day. Eric was a regular at the store and it's likely they would have remembered him. Eric was looking forward to getting his driver's license, as well as attending college, and had been accepted to several different University of California colleges at the time. He was an excellent student and had no known problems. He has not been seen or heard from since the day he disappeared. If you have any information about the disappearance of Byron Eric Page, please call the Los Angeles County Sheriff's Department at 329-890-5500.

Curtis Hunzinger left his family home in Blue Lake, California on May 19th, 1990, and was never seen again. the 14-year-old was initially classified as a runaway, but his mother never believed that was true. Earlier that month, Curtis has confessed to his mother Nancy that her boss, Stephen Daniel Hash, had molested him. She contacted police, but when Curtis was interviewed on the 11th he denied his initial story, so the investigation into his allegations was dropped. When he disappeared on the 19th, his case quickly went cold, and police insisted they found no evidence of foul play, and for a decade that was the story they stuck to, despite insistence from Curtis's mother that her son would not have run away. In 1999, Nancy told police that Hash had confessed to killing her son and that he'd shown her where Curtis's body was, and police restarted the investigation, but once again, nothing was found. Two years later, in 2001, Hash's wife Deann claimed that her husband had confessed to her that he had killed Curtis. This claim was not taken seriously, and Hash refused to incriminate himself in the case, though he didn't deny he'd killed the boy either. Finally, in 2008, a new investigator felt there was enough evidence to issue a warrant for Hash's arrest, and the man was taken into custody. Hash claimed Curtis came to his house on the 18th of May, 1990 and they argued over the molestation allegations, and Hash hit the boy with a barbell, killing him. He led police to Curtis's body, the same area he had shown to Nancy years earlier. Stephen Daniel Hash pled guilty to manslaughter and was sentenced to just 11 years in prison for Hurzinger's death. Nancy Hurzinger was awarded $3.6 million in a wrongful death suit in 2011.

Thomas Gibson, just 2 years old, disappeared from his family's yard in Azalea, Oregon on March 18, 1991. This is the most complicated case mentioned in the music video. Gibson's father, Larry, then the Douglas County Sheriff, claimed that while on a jog on the family property that morning, he shot at a stray cat and missed. He finished his jog and returned home, then learned that Thomas, known as Tommy, was missing. He believed the boy was playing near the area where he shot the cat. Police were called out later in the day to help search the property, but no sign of the boy was found. During the investigation Larry, who had been told not to report to work, dressed for work and left for about 25 minutes during the search. His whereabouts during that time period are unknown, though he claimed he was helping look for his son. He claimed that Tommy's sister saw a couple pull up the driveway in their car, then leave. He insisted that while he was unaccounted for during this 25 minutes he was looking for the couple, but there were mileage discrepancies on his police cruiser. At other times during the investigation, Larry sat at home and insisted that the search be called off because it was snowing. His fellow officers were suspicious of the sheriff's odd, unconcerned behavior. A dead cat was found near where Thomas had been playing, and officers believed Larry had in fact killed the cat, but may also have shot his own son either on purpose or by accident, then buried the boy after he realized what he'd done. Larry later moved his family to Montana until he and his wife separated and she moved with their remaining children back to Oregon. Immediately after her return, his estranged wife (sorry, I didn't find a name) and one of Larry's daughters changed their stories. They told police the girl had witnessed him abusing Tommy. Police came up with a theory that Larry had either shot and killed the boy, or beaten him to death, then used his cruiser to dispose of the body while his officers were occupied with the search for Tommy. He denied any involvement, but was convicted of second-degree manslaughter in 1995 and released in 1996. He still insist's he's innocent of any wrongdoing, and has created a web page for his son, who has never been found. If you have any information about the disappearance of Thomas Dean Gibson, please call the Douglas County Sheriff's Department at 503-440-4450.

There are several other missing persons featured in the video for which I can't find any information.

Whether they were later found alive, or family hasn't allowed interviews or released other information since the video debuted, there is nothing to be had from all the major missing persons agencies and websites that profile cases like these.

​UPDATE: While there have not been any updates to the individual cases profiled in this post, there is a new music video. 'Runaway Train' was recorded by new artists in 2019, and a new video filmed, to help more missing children and young adults find their way home. Read through this post, then click this link to view the new video and see missing children specific to your area.
Email Post
Labels: Into the Unknown Update