Into the Unknown: Little Lord Fauntleroy 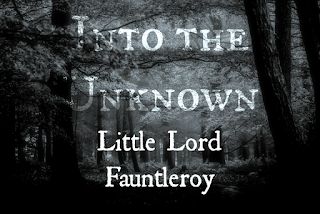 I've wanted to do this for a long time. I love unsolved mysteries, and often spend hours a week reading about them, watching documentaries about them, and watching reruns of my favorite show, Unsolved Mysteries. Why not take a crack at writing up some of the more baffling cases I've read about? Getting the word out about them is what helps get these cases solved. I will profile cold cases, unsolved murders, and missing people. Some of these will be cases chosen because of their proximity to me, some because they simply break my heart. They're all important, and every case begs for answers.

Some of the content in this series of posts may disturb or upset sensitive readers. I will not post graphic pictures, but websites found by following links in this post may. Reader discretion is advised.

Today, I start with a case that sticks in my mind mostly because it involves a child. This is an old case, long cold, dating back to 1921 in Waukesha, Wisconsin.

THE HISTORY: The city of Waukesha is twenty miles west of Milwaukee, but today it has a population of just 71,000. In 1921, it was little more than a small town, with less than 13,000 residents. A town of this size still felt 'country,' especially in the days before the easy communication we enjoy nowadays. Most homes in America didn't have a telephone in them. Hell, 65% of homes still didn't even have electricity yet. News spread more slowly back then. Even shocking news.

On March 8, 1921, the body of a small boy was found in a quarry pond near the O'Loughlin Stone Company (now known as Waukesha Lime and Stone), located off I-94.

THE VICTIM: Several things stood out about the boy. Otherwise healthy and well-nourished, he was dressed in clothing that suggested his family was well-off. He wasn't wearing a coat despite the cold weather Wisconsin is notorious for at that time of year. He did have patent leather shoes with cloth tops, a gray Bradley brand sweater, Munsing underwear, a light blouse, and black lightweight stockings. Before he was thrown into the water, he was struck in the head with a blunt object, and homicide by that means was his official cause of death. The boy was between the ages of 5 and 7 years old, had blonde hair, brown eyes, and a missing baby tooth in his lower jaw. His exact time of death isn't certain. Despite the fact that his body was in excellent condition, the winter cold could have preserved him, and it's possible he could have been in the water for months.

THE INVESTIGATION: After the boy's body was found by a quarry employee, he was dubbed "Little Lord Fauntleroy" after the Frances Hodgson Burnett novel. An employee of the quarry (it's uncertain if this is the same employee that found the boy's body or not) reported seeing a couple, a well-dressed man and a woman in a red dress, looking at the pond. The couple looked upset and asked if he or anyone he knew of had seen a small boy. No one had, and the pair were never seen or heard from again. The police investigation turned up no further leads. The only possibility they could come up with, due to the strange circumstances of both cases, was that of a six-year-old boy who went missing from Milwaukee around the time of Little Lord Fauntleroy's death. The boy was Homer Lemay. Homer's father Edmond claimed his son was in Argentina with a couple whose surname was Norton, and was killed in a car accident there, but no part of his story was ever confirmed. To this day, Homer has never been found and Little Lord Fauntleroy is still unidentified.

THE AFTERMATH: A funeral home in Waukesha put the boy's body on display for several days, hoping someone would come forward and identify him, but no one turned up, despite a $1,000 reward. A local woman named Minnie Conrad raised the money for a headstone and funeral, and the boy was buried on March 17th, 1921 in Prairie Home Cemetery. Locals reported seeing a veiled woman placing flowers on the boy's grave, but if the reports were true the mystery woman never came forward and was never identified.

It has been 96 years since Little Lord Fauntleroy was found in that quarry pond, and due to the passage of time no law enforcement agency is actively investigating this case. However, if you have any information regarding this case, please call the Waukesha Police Department at 262-524-3762.
Email Post
Labels: Into the Unknown