So, How Do You Write a Book? 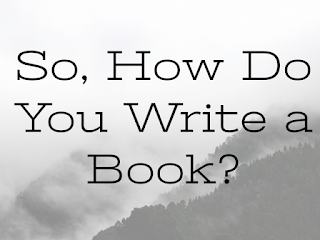 ​I think anyone with any job at some point is going to hear this question: How do you________? Build a house, shoe a horse, feed a hippo, flush a radiator, shake that moneymaker? Whatever it is you do, people wanna know how you do it.

I'm here today to give you my answer to the question: How do you write a book? Damned if I know. There. That's my answer.

​No, seriously. You'd think I'd have a better answer than that, but I don't. This is one of those questions I get all the time. I will try to sum up my thoughts on this arduous process as best I can for anyone who is willing to let me ramble on for a while. Luckily, Tom Hanks is here to help me out.

In my experience, the best way to start is to do just that. Start. That sounds simplistic, but it's really all I have for you. I can, however, describe my process a bit and let you in on how I work. Sort of. It's different every time, in small ways, as I hopefully get better at this.

​Books never come to me wholesale. It starts like this: In my head, I get an interaction between two characters I haven't met yet. I don't imagine it, I don't dream it. The interaction comes to me like I'm witnessing it, like walking into a room I didn't realize was occupied. That interaction plays over and over in my head like a movie scene, and I have to let it ruminate like that for a while before I can do anything with it. I get their names the same way. This sometimes happens long after I've written down the interaction I barged in on, like with The Cottage, when Owen didn't give me his name until the rough draft was damn near done. Eventually I start to get a feel for who these people are and why they're in this conversation/altercation/whatever. Over time, one of two things happens. I only see that one small scene over and over and nothing ever comes of it, or I start to see the different outcomes from different choices the characters can make.

When I start seeing different outcomes, I know it's showtime. I open a new file in Microsoft Word and set it up as as such: Garamond, size 11, double spaced, indent on first line, justified alignment, 1/2 inch margins so it's ready for eBook formatting.

And then I write. Whether this becomes a scene, a short story, or a full-length novel depends on how many more interactions I get from these characters, or if that's the only one. I have a folder on my laptop of nothing but short one-off scenes that I may never use for anything longer than the file they're in now. But every once in a while, I get lucky.

I describe my method of writing as 'brain vomit,' and my poor editor would tell you that is exactly what it is at first. Books don't come to me in order, so they don't always make sense even to me. But I get it out of my head and onto the page. Once that first scene is written, I let whatever comes next, come. If I get nothing going forward from that scene, I set it aside and write anything else that comes to me.
On the subject of outlining, because it is a thing writers obsess over, my opinion of them is middling at best. I am not nearly as obsessive or anal-retentive as some authors. I always do an outline, even though I fly by the seat of my pants through a lot of my writing. And (this is very important to my ass-backward process) I never do an outline before I have several scenes written down, enough to inform me roughly how the whole story is going to go.
The outline is more or less how I want these scenes to connect to one another toward an end. I say 'more or less' because sometimes a character throws me a curve ball and I have to take the work in a totally different direction. And sometimes, I have no idea how the scenes will add up to a novel until I've got 60,000 or so words down, and then it all falls together like magic. It's more fun that way, and flows so much better. I never know what I'm writing until I write it, and I'm never certain how it'll all end until I write the ending. With Snowbound, I wrote two different endings and tossed the one that just didn't feel right.

I'm just a conduit for my characters. I'm here to dictate their story as they show it to me. There have been times in each of the books I've written where I've gone back to look at it and have no memory of writing what's on the page. That's when the writing is best because I'm not overthinking it. The scenes that have given me the most intense emotional impact are scenes I don't have a good recollection of writing. That's also when I write 10,000 words in a sitting because it's coming so easily. It's not always like that, of course. Most times, it comes up only if I blast it out with bourbon and depth charges, one word at a time.

I tell you this, even though it might seem like I'm just rambling, because I want to show you that my method is not perfect. Far from it. But it works. That doesn't mean it will for you, and that's okay. My method is different from what a lot of authors do. And that's okay. Some authors are rigorous and regimented, with a well-detailed outline they stick to like glue, and a writing schedule complete with a word count goal and alarm clocks and timers. I have none of those things. I write daily, but if the muse is not pleased, I might plunk out a couple hundred words and have to give it up for the day. And I hate alarm clocks and timers. I write when I'm good and goddamn ready. My outlines, while they take me from point A to point B, meander and leave room for things to change if they need to. Both of these methods work, and a million others besides. None of them are wrong, and as long as you wind up with a manuscript in your hands at the end of it, who cares how you made it happen? I don't. And neither will your readers.

And now we come to the portion of the Sarah Winter Experience™ where I do a little truth-telling and a little educating.

I hear you saying you don't have time. I say that every time someone asks me if I work out. "I don't have time" is a lie we tell when we either really don't want to do something (like working out) or are afraid of failing at it (like writing). You can't know whether you'll fail at something if you never try to succeed at it in the first place, right? Get on with it.

As for not having the time, I'm here to prove you wrong. Sorry. You do have the time, even with a full-time job, kids, dating, friends, family, TV, everything else you have going on. I'll prove it.

Not everyone can type this fast, but we'll use me as an example. Adjust your math accordingly. I type roughly 60 words per minute, accounting for errors. 60 words per minute means I can write about 900 words in fifteen minutes, give or take. Now for some simple math. Writing just those 900 words a day, you can write a 90,000 word manuscript (for comparison, Beauty and the Beast is 90,299 words) in 100 days, just over three months. It took me six months to write Beauty, so 100 days is awesome.

Not bad for fifteen minutes a day, huh? You could write a book using just one of your fifteen-minute breaks at work every day for less than four months. Boom.

Obviously, editing and everything else that goes along with writing will eat up a lot of time as well, but it's not unreasonable to think that with just fifteen minutes a day, you could write, edit, format, design, and self-publish a book (or submit to a publisher) in under a year. Even if you take a highly recommended cooling-off period of at least three months after you finish the manuscript before you begin editing, you should have that book out in the world in under eighteen months if you self-publish. If you're submitting to agents and publishers, your timeline will obviously be different, but you will still have a completed book in your hot little hands.

As far as how you're going to get it done, that's entirely up to you. I'm a disorganized mess while others are scheduled to the minute, and it all works. I write scenes in my books in whatever order they come to me, then shift stuff so it makes sense while others write each scene in order. I use a half-ass outline and leave plenty of room for surprises (love those), while others outline every detail. You could do something completely different. It doesn't matter, as long as you get it done. And you have the time, all you need to do now is get started.

So, what are you waiting for?
Labels: Advice Being an Indie Author