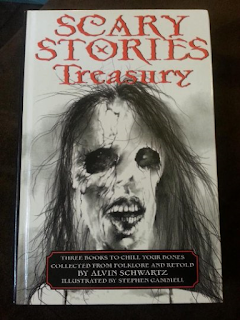 These books were originally published in 1981, 1984, and 1991, respectively. They are still in print, although there has been a massive, very upsetting change.
​ 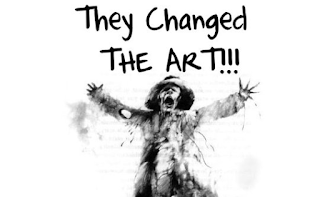 The book cover illustrations used to look like this: 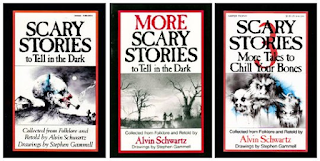 ​Lame. I’ll get into the illustrations a little more later on. For now, though, I must talk about the stories.

Schwartz did some hardcore research for these books, and it shows.

Most of the stories, especially in the first book in the collection, are famous scary stories collected from folklore, like 'The Big Toe,' which is based on a classic story called 'The Golden Arm,’ which The Grimm brothers wrote a version of and Mark Twain used to tell during public performances. ‘The Girl Who Stood on a Grave’ is also a classic piece of folklore about a girl who frightens herself to death after following through on a dare. ‘The Babysitter’ is a story that has been retold not only in books but films as well, where a babysitter receives phone calls that she later discovers are coming from within the house. ‘The Hook’ is a story nearly everyone has heard in some form. A Native American legend also features in ‘The Wendigo.’

The second book, More Scary Stories to Tell in the Dark, was the first of these that I read, and has stories that are more frightening than the first. ‘Somebody Fell From Aloft’ is a story of a ship’s crew scared by an unexpected stowaway bent on revenge. The illustration alone is enough to haunt your dreams. 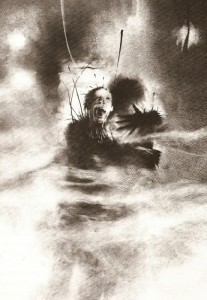 ​Go ahead, blow that bad boy up. *shudder*

There are more dark and bizarre stories in this book, like ‘The Drum,’ a story of two girls who find a gypsy playing a drum and are enticed to be more and more horrible until there are dire consequences. This one's always been upsetting to me because even at the end and even at my age, I still don't fully understand what happens and why. It's dark and twisted. There is a vampire story, ‘The Window,’ the setting of which reminded me so much of my own house that I was afraid to look out my bedroom window for a time.

Book three in the trilogy, Scary Stories 3, is even darker than the second. There are stories and illustrations in this one that still bother me even now. There are still some taken right from folklore, like ‘The Bus Stop,’ which is a legend in the Phantom Hitchhiker vein. In a section of the book titled On the Edge are some of the strangest stories collected in all three books. ‘Bess’ is the story of a farmer and his favorite horse, who is destined (as told by a mysterious stranger) to kill him. ‘Harold,’ which is about a scarecrow that comes to life to exact grisly revenge on a pair of farmhands who treat him with cruelty, is a story that still haunts my most vivid nightmares. If you’ve ever read it, you’ll understand why. Just writing about that story bumps up my heart rate.

An entire section of the book, Running Wild, is dedicated to a legend that has evidence to its veracity. It is the story of a feral child in the Devil’s River area of Texas who was raised by wolves. That is not the only story in this book that is possibly based on true events. ‘Maybe you Will Remember’ is the story of a young woman who is on vacation with her mother when the mother falls ill. After a wild goose chase through a strange city to retrieve medicine, the young woman returns to the hotel to discover her mother is nowhere to be found, the hotel staff doesn’t remember either of them, and the room she remembers doesn’t exist. The story was reported as a factual account from England in 1911 in the London Daily Mail. The Trouble is a section dedicated to poltergeist activity, with firsthand accounts and scientific evidence.

Schwartz also makes sure to inject humor, telling stories like ‘The Viper,’ where a window-washer's thick accent causes a housewife undue distress. Several of the stories have been set up with read-aloud instructions, and there’s a couple songs in there for a sing-a-long.

The notes and sources at the end of each book (and at the end of the entire series in the Kindle version) are worth reading as well, as Schwartz explains where he got the story from and it’s canonical origins.

Stephen Gammell’s illustrations are a large part of what made these books so nerve-wrackingly scary. They’re also a large part of the reason these books are challenged. Faces are distorted, animals’ bodies are melded with human parts, hair becomes a broom-brush wild with static and oil. These were the first drawings I’d ever seen that I felt had a physical texture. I had to put a Post-It note over one of them, which accompanies the story ‘It’s Him!’ 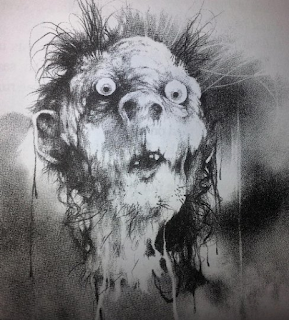 ​Still hate that thing. Fucker’s gonna get me in my sleep one of these nights.

These are, in my humble opinion, the best illustrations ever included in a children’s book. Now we're going to get into the new artwork, because the fact that Gammell's have been replaced is an offense to the original work.

On the left is the original by Stephen Gammell, and on the right is the new art, by Brett Helquist. 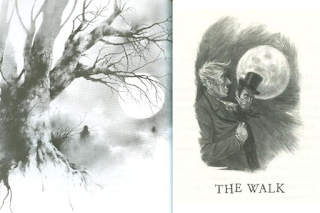 ​The original illustration fosters a feeling of dread. What are those things? Why are they so far apart? Are they walking away from you, or toward you? In Helquist's, these are two Disney-cartoon Victorian dandies. This happened 150 years ago. Who cares? 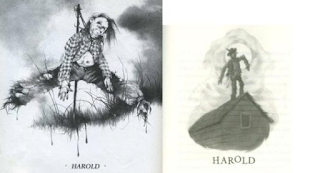 ​In the original, Harold could be a grumpy looking man in a scarecrow suit. His beady eyes stare you down as he scowls at you. Is that food smeared on his face, or something more…unappetizing? Why are his hands mismatched?! WHERE THE HELL ARE HIS FEET?! In Helquist’s, he’s just a little straw man, a little wonky, kinda cute, up on a roof. This illustration, in particular, doesn't fit the blood-curdling story they illustrate.

From ‘The Haunted House’ 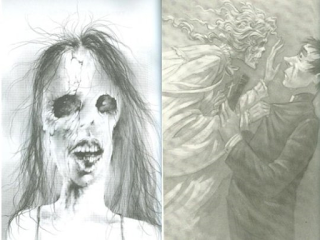 There she is, people. This drawing is iconic and for damned good reason. She’s focused on YOU, Dear Reader, not some dude in a Roman collar. You’re being pulled into the story by this misshapen spirit. This is also one of my favorite stories in the series. Love this one.

Brett Helquist did a beautiful job with his illustrations. Dude has talent, and also illustrated Lemony Snicket's A Series of Unfortunate Events. But his illustrations fail to do what Gammell's did so easily. Gammells’ broke the fourth wall to force you into the story, leaving you to soil yourself, and try to move on with life without permanent psychological trauma. His illustrations made you feel unsafe, uneasy. Helquist’s illustrate the story as its told but you can get to the end of the story without any emotional involvement because you weren’t asked to join in.

The books you read as a child have a lifelong impact. I’ve never forgotten these books, and couldn’t wait to share them with my boys once they were old enough. They now have my old copies. The versions of these books with the original illustrations are out of print and only available through third-party sellers *see below, while the versions with the Helquist illustrations are readily available in a box set.

I hunted for the original hardcopy collection for months, finally nabbing a copy on eBay in excellent shape. Totally worth the time spent searching and the cost.

A documentary has been produced about the cultural impact of the Scary Stories books. Click the link to read about it, check out some killer fanart, or watch the trailer. The documentary is available in digital format for purchase and is offered for free through streaming services (as of 4.22.2022, IMDB has it).

The books were released in their entirety, with original illustrations, on Kindle on 4.30.2019. The books have been re-released with the original illustrations and are available through Scholastic book orders and from Amazon.
Legendary director Guillermo del Toro and Trollhunters director Andre Øvredal created an original film based on several stories from these books, Scary Stories to Tell in the Dark, which is available now.
Email Post
Labels: Reading