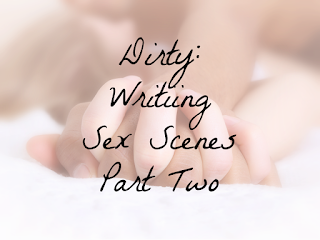 There's some work to do even before we write the sex scene we're planning. We covered some of that last month, and we'll get to some more now. The planning is every bit as important as the execution. Whether you're a pantser or a plotter, authors must consider whether the scene is necessary.

​I have read many books during my lifetime. Many. Books. A lot of them have had sex scenes in them. A. Lot. *sorry, I'll stop* Not all of these scenes really needed to be there. And when an author shoehorns a sex scene in where it doesn't belong, it just feels wrong. Just like a character death where none was needed, or a fight that didn't need to happen, these scenes just don't add anything to the story. They're the Jar-Jar Binks of the book world: they're there, they make annoying noises and take up your valuable time, but if you killed them off, the story wouldn't change. Keep that in mind before you start your scene.

I have to admit, especially considering this is post and the others in this series could be taken as advice, that I'm not one of those people to whom the phrase, "practice what you preach" has been a rule. More of a guideline. Okay, fine, I throw the stupid thing out the window and write the scene anyway, damn the consequences. Of course, there is a time where the scene can be scrutinized and eliminated later. The dreaded editing process. This is where we fine-tune and perfect our manuscript so it's ready for readers. Our Dear, Precious Readers.

So far, I've written all three of my books in a fury. From start to first draft usually takes about 30-90 days. I write everything down that comes to me each day. The next day, I give the previous day's work a cursory once-over to remind me where I left off, then it's off to the races again. I've had a few days where I've written 15,000 words in one shot. I'm going so fast, I don't get to deleting whole scenes until I edit the rough draft into the first, which I do before I send it to my editor.

I have a lot of rules for editing. Delete as many adverbs as possible, cut down on the word 'that,' and edit passive voice (if you can add 'by zombies' after the verb and the sentence still makes sense, it's passive. You're welcome). Those are, of course, just a few. One of my biggest, most important rules for any scene I create is to evaluate and prune those that don't move the story forward. Sex scenes are the scenes that I'm probably hardest on.

This whole process would be easier if I would learn to evaluate my scenes before I wrote them, but the point remains the same. If the sex is just there because I want a sex scene in the book somewhere, the scene goes. If it is a natural progression of the relationship between my characters, it stays. It's that simple, and it's that difficult.
Labels: Advice Dirty Series