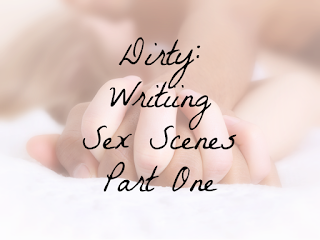 Some schools of thought believe everything we do is in pursuit of one thing, and one thing only. It's a biological imperative that has ensured our species' survival and advancement to the top of the food chain.

But there aren't many of us who enjoy writing about it.

​I'm talking about sex of course, and I'm here today to let you in on how to write about it. Without getting squicked out.

I'm not the first writer or blogger to give readers and fellow authors a look into my process of writing sex scenes, but I think I have something to add to this area of writing, so I'll let you guys in on what I think makes these scenes work, and how I got over some initial nervousness about writing the deed. These posts will be in a series. As of yet, I don't know how many parts this will end up being, or how often I'll post them, but I'll get us started here.

First things first. Let's get over our initial, I'm-about-to-write-a-sex-scene jitters, shall we?

When I was writing Snowbound, I was nervous about the fact that I was writing a whole book to begin with, but the story is romantic and very sexy. Two beautiful people trapped in a cabin, alone, in winter, during a blizzard. GASP! The sex, it is bound to happen. And I will have to write it. Closing the bedroom door on these scenes just didn't seem authentic. I felt like if I were reading the book, I'd want to know what was happening. So in this case I just went for it. It's definitely graphic, and I didn't hold much back. Foreplay, teasing, kissing, the deed itself, several times. It's got it all. I knew what I wanted to do with it, and I told myself to just go for it.

I think the key to writing your first sex scene is giving yourself permission to do so. I knew I would have to write it, and tackled the job handily by telling myself I wasn't doing anything illegal, immoral, or even weird. I told myself that it was moving the story forward, another point we'll get to later on, and that it was a natural progression of the story for my characters, Liam and River. Once I realized it was okay and even made sense for this scene to happen, writing it got a bit easier. Not easy, but easier.

I think a lot of the reason we're embarrassed or nervous to write about sex is the way society treats sex in general. It's treated as this dirty thing, something to hide behind closed doors, even shameful at times. Part of our reticence may also be that we think the way we've either imagined sex or the way we've been having it is weird or wrong. Trust me, unless what you've been doing/imagining is illegal, you're fine. There's nothing to be ashamed of, and it's fine to write it down. Don't want to use your own experience or fantasy? Make one up! That's what we're here for, isn't it?

Sex is a part of life, and is a part of a lot of the books we read, even if that's not the sole focus of the book. People may even have bought your book for the purpose of reading the sex scene you're about to tackle. Shed the shame, stop feeling like you're doing something wrong, and let's get started!
Labels: Advice Dirty Series